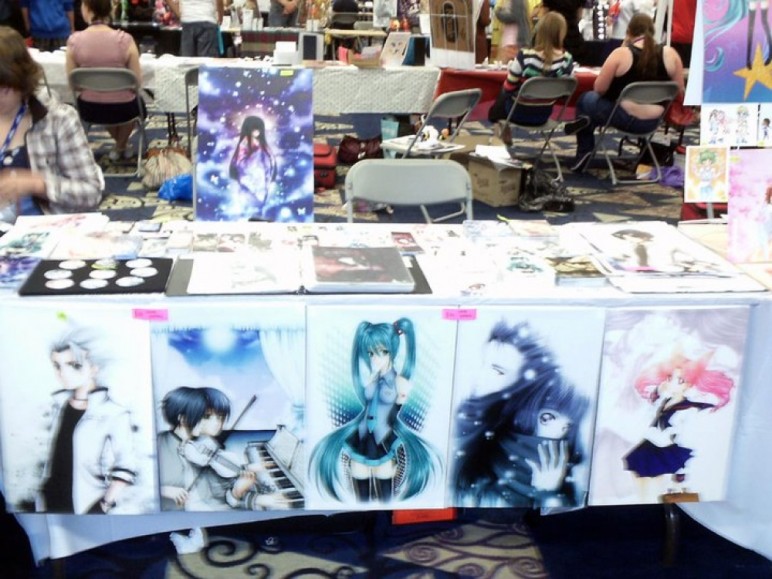 it’s nice to be back home and great to know that fellow Winnipegers support my stuff just like Toronto.. I actually made more sales in this con than anime north..! the biggest con sale so far and to think it wasn’t as busy as the others.. I just had more posters to sell this time.. =P 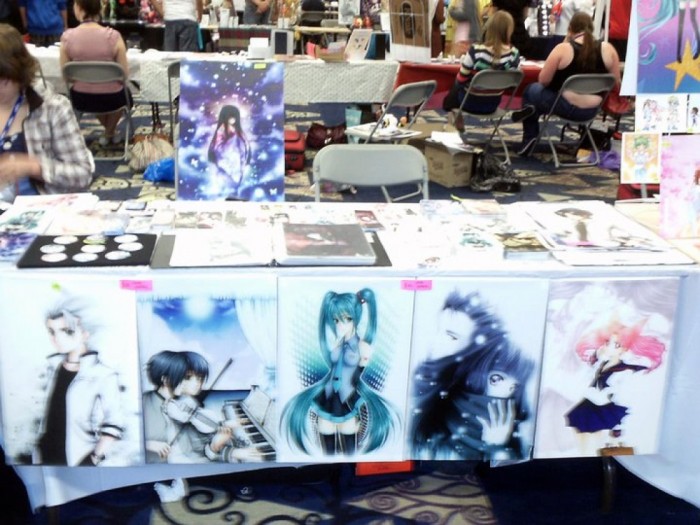 expenses.. about $400….. OTL $167 went to ai-kon’s entrance, artist table and the art gallery…… >x< prints and cosplay took the rest.. I made more here compared to anime north but I earned back more in anime north coz of the huge expenses I had here.. even though i didn’t have to spend hotel and airfare… tsk… anyways…. pictures… not much really… i was working on the 2nd commission for TigerFey from deviantart.. this was the commissioned piece.. and this is the sweet TigerFey holding the commissioned pieces he ordered.. :>

my sales were successful too.. i got rid of my huge posters but i didn’t have the chance to take pics of those who bought it.. OTL.. just this one coz it’s interesting.. a cool Karin cosplayer bought my small Sasuke poster.. ♥

I don’t remember her voice much but she left an impression that she’s the real Karin.. *thumbsup*

the art gallery.. I knew I had to take remembrance pic of the ones I put in the gallery coz everything got sold.. @v@

it was their first time having an art auction gallery.. a few issues have been brought to me by some of the bidders and watchers.. they noticed most of the displays in the gallery (5 out of 10?) were mine.. lol.. if it was me, I would probably wonder the same thing.. >v<! the fee per displayed piece is not so friendly.. definitely one of my major concerns and most likely the other artist who tried to enter the gallery had the same concern.. I like their idea of selecting pieces for the gallery but I can’t swallow paying $15 for each display.. I just had to remove my other pieces that got accepted.. the gallery was already more expensive than the artist table.. >_> the displays were also inconvenient.. Even though people will probably roam around the whole room, the gallery space is in the corner end and didn’t feel special.. The pieces were also laid flat. They offered stands but didn’t really happen.. I was gonna bring stands for mine but got warned that it might make it worse.. I see the point.. if people can freely see and touch the displays and the pieces are standing in the table, they might fall and get damaged…. XD It’s way too open for everyone to see. Anyone can bid like one of my pieces got a bid of “$99 billion mwahaha” (yes, with the mwahaha..) and anyone can runaway with it.. uh, there are volunteers in the exit but no security or watchers near the area.. what if someone scratched the pieces..? joke.. XD and there was no receipt provided in the end of the transaction.. I came to Amy for the rest of the payment but it seems she already gave me everything… I tried to recall and she could be right.. >w< can’t help but compare to anime north’s gallery.. we only had to pay for the table not per display and we’re free to put however many pieces with the given space, open for everyone to see but only officially registered bidders can bid for the pieces, volunteers on guard on entrance/exit and inside the special room, detailed sales transaction by the end of the con and a commission fee deducted from the total sales which is totally fine… but oh well.. the ai-kon gallery went well regardless..

these are some of the people who won the bidding for my pieces in the auction..

^ it was nice of her to give me the payment herself.. and because there was a change, she just took an oversized postcard for it or was it bookmarks..? XD

finally, cosplay pics.. i mean, my cosplay pics.. lol.. glad i can get a hold of some of those who took my pics.. still waiting for the official aikon photographer for other pics.. i’ll probably just update this post..

^ credits to Chec for the pic and QQcosplay for the outfit..

^ credits to Brad’s friend for the pic and Yoyo aka buumoo for my kikyo cosplay..

other cosplayers.. I saw a lot but I didn’t get a chance to take a lot of pics.. here are just some of the cool ones..

I don’t have that many pics.. OTL forgot my camera, busy doodling and chatting.. XD view full album –> ai-kon 2011

some good things about this con:

I knew Jessyca from theOtaku but I didn’t know she’s from Winnipeg so I just had to move beside her table.. My conscience was poking me when I decided to move.. I was sort of set in my previous spot, supposed to sit together with Justin Currie, another amazing artist that you should totally check out, and Lenette who makes adorable crafts.. I’m not really sure how she looks like without her cosplay coz she looks different everyday.. XD but yeah.. I felt bad when I moved but given the sweet spot beside Jessyca, not to mention, it’s by the entrance, I just had to move.. >w<! I thought I was lucky when I paid to upgrade to a full table but Jessyca here was supposed to have just half of the table… I would’ve invited Len if I knew since Justin also upgraded to a full table.. XD but anyways, it’s nice to be able to upgrade to a full table coz half of it is definitely not enough for all my stuff.. >v<

another good thing about this con is that the dealers room is on the same room as the artist alley.. our table is in the front so just across us are the dealers.. I was able to buy 2 sketchbooks from Artist Emporium for a super cheap $7 for both.. tax free..~ I was gonna buy copics coz the set of 12 was just $60..? It’s already cheap as they say but I don’t see myself using it this year or next year so no point in spending money for that.. besides, I had to buy slippers for $40 in the dealers coz mine broke… >__< my slippers broke on the first day of the con when I was wearing my kikyo cosplay.. I just had a regular flip flops but it seems it’s not really meant to be.. I was walking barefoot for hours.. luckily I found a booth selling traditional japanese geta slippers before the con started.. I had no choice but to buy it or wear nothing throughout the whole day.. XD it was nice and maybe worth the money.. it matches my kikyo cosplay too but kinda hard to walk with it especially on non-carpet floors.. my cousins who tried it said the same thing.. >v< it just takes a while to get used to it..

another good thing about this con, the artist alley is so spacious.. There’s a huge empty space behind us and the alley had enough space to walk with.. or maybe there wasn’t that many crowd..? but surely, this is the most spacious artist alley ever.. so it wasn’t that hard to walk barefoot especially since it’s carpet and I see them cleaning it before they open each day.. well groomed area.. :>

Staff and volunteers are very friendly.. Amy, the coordinator is also very nice and approachable.. some university friends are volunteers this year.. sweet of them to give me iced capp as ordered and spend time in my space.. if only they gathered more people in my space, that’d be better.. just kidding.. lol.. =P

as usual, I was lazy to go around the alley but I saw a lot of amazing displays and fellow artists were also nice and friendly.. some familiar faces and names too..~ by the end of the con, some artist came to me for a trade.. I don’t ask for trades.. too shy to ask..?! but when people asked, it was just hard to say no.. XD 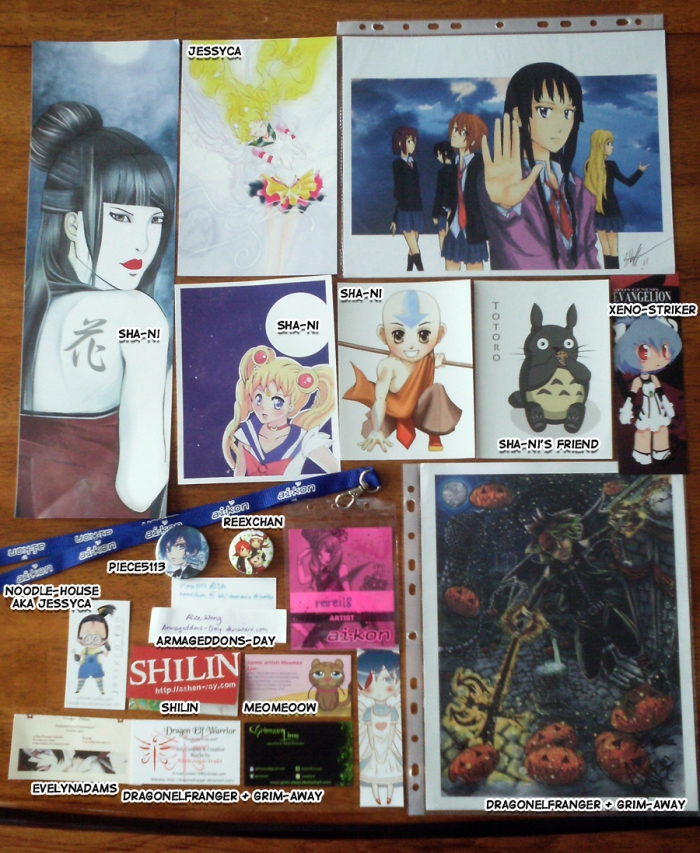 a lot from sha-ni.. =P i think she bought a print and still came for a trade.. <3 others didn’t have a link to their site but everyone else had deviantart.. surprised to see meomeo.. I knew her from theOtaku.. I really thought she’s a guy but I saw her works and recognized some of them.. I tilted my head and thought, “meomeo is a girl..?! o_o!” she kinda reminds me of my friend Angela aka snowp.. lol.. Shilin was there too… she was so nice.. it’s just a shame I couldn’t get anything from her.. why didn’t I..?! gaah.. OTL I probably just won’t spend money on something from another artist.. maybe…. and I think it was right after I bought the sandals.. >v<! but maybe if I see her again on the next cons, I will get myself a remembrance of her pretty art.. gaah.. I should’ve bought something…. >_> and oh, Justin, you owe me something coz you took a bookmark.. lol just kidding..~ =P

overall, it was a fun convention.. family and family friends being so supportive.. *hugs* friends and unexpected online friends were there too..~ I really enjoyed this one and definitely will try to come back next year.. :>